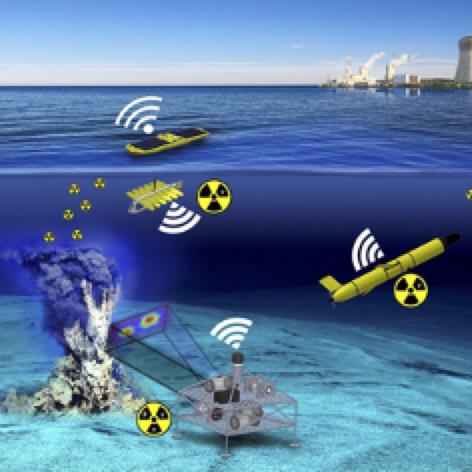 Natural and artificial radioactivity in deep oceans is still significantly under-sampled and largely understudied, despite its importance for the sustainability of marine environments. RAMONES (RadioActivity Monitoring in OceaN EcosystemS) is a newly funded FET Proactive Environmental Intelligence project aiming at closing this existing gap by providing radically new solutions for autonomous, large-scale monitoring of radioactivity in harsh subsea environments.

RAMONES ambition is to bring together innovative technology and recent advancements in sensory materials, low-power autonomous robotic systems, and state-of-the-art modelling techniques to overcome current limitations in performing in situ and in near real time underwater radioactivity measurements at large spatiotemporal scales.

A new generation of submarine radiation-sensing instruments, assisted by state-of-the-art robotic and artificial intelligence, will be designed, developed and validated by RAMONES, to define the new standards in high efficiency and fine resolution of in situ spectroscopic studies in the marine environment. RAMONES aims to contribute to shaping the Environmental Intelligence framework of the next decade by offering novel technologies and suggesting new policies towards advancing environmental, social and financial resilience and sustainability.

(this article appeared on FETFX magazine)

We use cookies on our website to give you the most relevant experience by remembering your preferences and repeat visits. By clicking “Accept”, you consent to the use of ALL the cookies.
Cookie settingsACCEPT
Manage consent

This website uses cookies to improve your experience while you navigate through the website. Out of these, the cookies that are categorized as necessary are stored on your browser as they are essential for the working of basic functionalities of the website. We also use third-party cookies that help us analyze and understand how you use this website. These cookies will be stored in your browser only with your consent. You also have the option to opt-out of these cookies. But opting out of some of these cookies may affect your browsing experience.
Necessary Always Enabled

Any cookies that may not be particularly necessary for the website to function and is used specifically to collect user personal data via analytics, ads, other embedded contents are termed as non-necessary cookies. It is mandatory to procure user consent prior to running these cookies on your website.